I think it's about time that I take a break in posting about Spencer's trip and take a moment to devote a blog to the fabulous place that we stayed while in Florida.  Make a Wish made all of our arrangements and financed the majority of the trip.  They provided airfare, limos to and from the airport, made all of the arrangements, gave Spencer gifts and a send off party, and on top of that gave us all of the Spending money that we would need.  We spent NONE of our own money on this trip.  While we were there we stayed at a resort in Kissimee Florida that is known as Give Kids The World.  (GKTW for short.)  I probably cannot do this place justice in a simple blog but I will try. 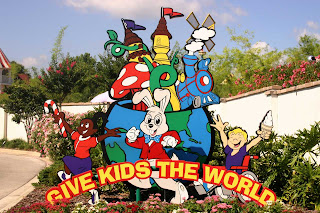 Located just fifteen minutes from the major attractions, over 115,000 families have visited the Give Kids the World village. They have come from all fifty states, as well as over 70 countries from around the world. Most of what happens at Give Kids the World is done by volunteers. Each week, there are over 1500 volunteer shifts. Volunteers range from young teens to adults in their 90s.  This is a beautiful place started by an amazing man who didn't do it for any reason except to help children with life-threatening illnesses and their families. There are so many organizations and companies that help out, yet you will see no logos or banners proclaiming their gifts at GKTW. It is only done for love.

Henri Landwirth was born in 1927 in Belgium. Along with his twin sister, Margot, he lived a happy early life with his parents Fanny and Max.And then came the Holocaust. Henri's family was Jewish.His father was arrested and soon after, his family was taken to the Krakow ghetto in Poland.His family was separated and later, his father was marched into a mass grave and shot in the back of the head. Towards the end of the war, his mother was also murdered by the Nazis. Along with many other women and girls, she was put into an old ship and sent out into the ocean. The guards took the lifeboats, fled the ship and then exploded the ship in the ocean.Henri was starved, beaten, humiliated and tortured. He was forced to work in a labor camp where the only goal was to get as much work out of him as possible before he died of starvation or was killed. He spent his teenage years in places like Matthausen and Auschwitz, witnessing things that are so horrible and so awful that I could barely stand to read about them. Henri lived through those horrible things for over five years. Days before the end of the war, a German guard was ordered to take Henri and two other prisoners into the woods and kill them. By some miracle, the guard decided that he didn't want to kill them, as close as it was to the end of the war. The guard told them to run, and Henri, although he was very badly injured, ran. When the war was over, Henri was filled with anger and hatred. He had suffered so greatly that he didn't care about what he did and who he might hurt.But Henri realized that his hatred was not doing him any good. That there was nothing positive that could ever come from it. He writes:


"There is no life-affirming value when a person keeps hatred and anger in his heart. Only bad things can come from such thoughts. It is possible to take that hate and anger, every drop of it, and change it into love and caring. Once a survivor can reach this point, he will be on the way to a better, more fulfilling life. No matter how cruel the past has been to you, today can be a happy time. Just for today, let yourself enjoy life. Instead of hating, reach out to your brother and sister and help them. Kindness makes all the difference, both to the person receiving it and the person giving it."
-Gift of Life by Henri Landwirth with J.P. Hendricks

Eventually Henri immigrated to the United States. Years later, he made his way to Florida and became employed in the hotel industry. When the space program came to Cape Canaveral, there was not sufficient lodging for all of the employees as well as all of the press who were coming to cover this important event. Henri was at the forefront of providing the hotel accommodations, as well as coming up with innovative programs that made him a favorite with the press and the first astronauts. He became well liked by people like Walter Cronkite, Alan Shephard and John Glenn. In 1986, a little girl named Amy was scheduled to stay at one of the Holiday Inns that Henri owned. She had incurable cancer and her biggest wish was to meet Mickey Mouse. Sadly, Amy died before all of the arrangements could be made for her trip.Henri's heart was broken by this news. He couldn't understand how, in America, we could allow any child to die without fulfilling their last wish.Henri was wealthy and he had connections and friendships with a whole lot of very influential people.But more importantly, Henri had the understanding of suffering in his soul. He knew what it meant to lose part of your childhood.And so, Henri took his knowledge of the hotel industry and his knowledge of the pain a child can suffer and made one of the most beautiful places I have ever seen.He created Give Kids the World.

All the food here is free....and you have options.  Breakfast and dinner are provided by Perkins restaurant in a place known as the Gingerbread House....the tables are child sized and covered in peppermints.  Everything here is about the kids.  No one carries their own trays...not even the grown ups.  They don't want you to have to worry about anything and they want to do it all for you. 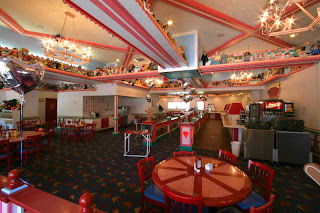 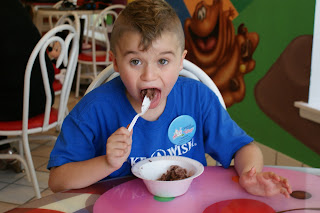 You can also get some pancakes there if you missed breakfast!

It's right beside Katie's Kitchen....which is run by Boston Market.  You can get lunch here and you can get dinner....delivered to you at your villa even.  They also have amazing chocolate chip cookies!

A little farther down is the Safari Theatre....where you can grab a slurpee and catch a movie! 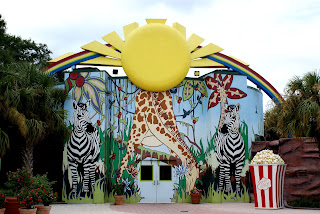 My husband was suprized to see that inside it's JUST like a movie theatre....it has a concession stand and movie theatre seats!

There is also the amberville train station....where you can drive model boats in the water, play video games, or ride the train around the station! 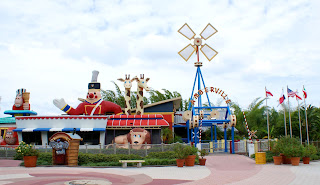 There is putt putt golf... 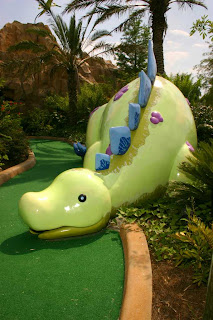 There is the castle of miracles, where every child who has ever visited the village places a star that goes up on the ceiling thanks to a magical fairy..... 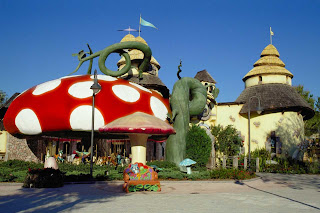 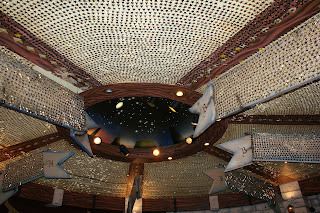 a ceiling covered in stars... 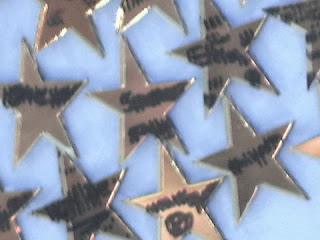 Spencer's star, in the middle, placed on the ceiling... 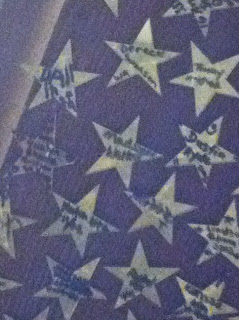 Madison's star, up on the ceiling from back in 2002

Every morning after breakfast, Spencer would take a ride on the Carousel.  He loved it.  Every day he picked a different animal to ride on. 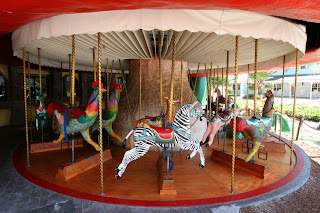 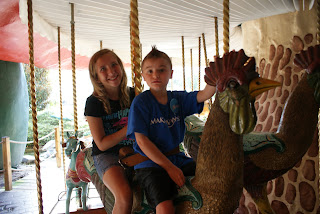 This chicken was a two seater!

This elephant sucks trash up his trunk! 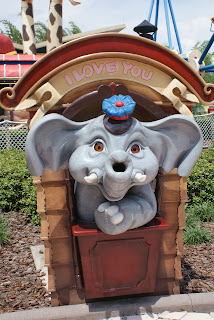 There was a train that would pick you up and drop you off where ever you wanted to go in the village! 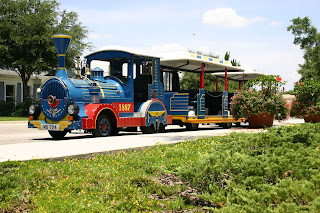 There is Matthew's boundless playground...which is made like a giant candyland game...and once a week the world's largest human game of Candyland is played there! 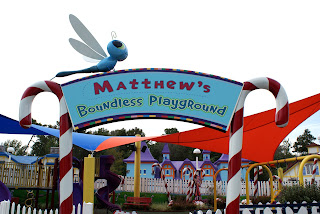 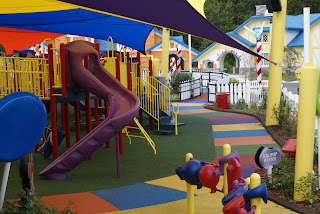 Spencer's favorite place to hang out, was at the Park of Dreams.....which has a huge swimming pool and water garden.  One night a week there is a huge pool party here, and another night there is a dive-in movie. 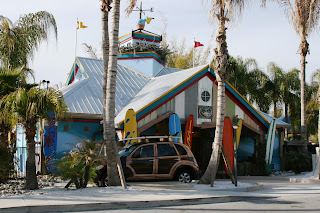 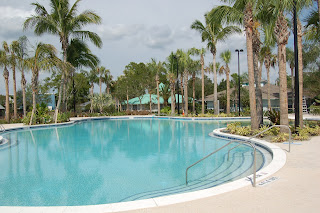 There are parties every night at the villa....one night is Christmas.  Complete with Santa, snow, and gifts.  Another night is Halloween, complete with costume decorating and trick or treating.  There is Mayor Clayton's big birthday bash once a week.  The pirates and princesses party.  The world's largest candyland game.  It just never stops.  It's a world all it's own.

Each family that stays here is assigned a villa.  It's essentially a three bedroom house.  They leave gifts for the kids every day while you are out at the parks.  They leave snacks and drinks.  It has washers and dryers and they provide the laundry detergent.  Everything at GKTW is free.  The food.  The entertainment.  The cookie cart that comes around in the evenings.  And they give you all the tickets to all the theme parks.  Then the theme parks give you free wheelchair and stroller rentals.  Free photos.  Spencer even got free souveniers from Disney that the workers just handed to him and said "they're yours."  Even companies that aren't Disney  Seaworld, or Universal donate to the kids.  Boggy Creek Airboat rides gave us free admission and photos.  The pirate dinner theatre gave Spencer free admission and the rest of us a huge discount.  Gatorworld let us all in free and gave us free photos.  So many people come together on a daily basis 365 days a year to make the magic happen for these kids.  We are honored to have been allowed to stay here. 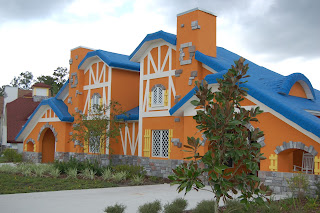 One of the villas.  (actually two...there is one on each side.)

There is alot more here that I'm missing, but I'm sure you get the idea.  GKTW is an amazing place, run by amazing people.  There are 120 paid employees and 8,000 volunteers.  Volunteers make up 1500 shifts a year.  We even saw kids as small as 9 years old volunteering....eagerly, politely, and with huge smiles.  Students.  And even those old enough that we should have been waiting on them.  (One of them joked "Have fun, laugh...but not too loud, you might wake up the volunteers!")  They served us food, gave us directions, took our pictures, provided us with towels at the pool, carried around parrots (yes parrots), baked us cookies, operated the carousel, and picked up our trash.  They even told us not to wash dishes or towels or anything when we left.  They do not want you working while you are there.  They will come let you in when you lock yourself out of your villa (yes we did it...it took them about one minute to hop in a golf cart and come let us in), and they will give you a wake up call in the morning.  They even gave us sunscreen and bugspray when we forgot ours.  It's the best place to stay in all of Florida...probably all of the world!