I am a crappy mom

I follow a blog by another mom called Life with Levi.  The other day she posted this picture. 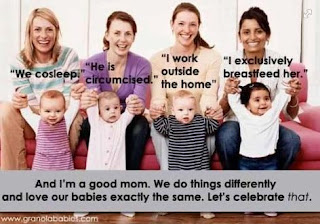 It was meant to celebrate the idea that all moms are different and that it's OK.  At first the comments people were leaving were respectful and civil.  Not everyone agreed with every choice shown but they expressed that in a honorable way.  Most were adult enough to realize that you can do things your own way and still be a good mom.  But then it took a wrong turn. Very quickly, they started bashing others who disagreed with them.  Verbally degrading them for their choices.  Parents were called abusers, mutilators, and a few were even called pedophiles.  All because their parenting choices were different.

In an effort to spread awareness that it's OKAY to be the parent that you are, as long as your children are happy and healthy, several bloggers are participating in a blog meme to share why we aren't perfect but we are still AWESOME moms.

In the theme of things, here are just a few of the bazillion reasons why I AM A CRAPPY MOM...

I do not spend as much time with my children as I should.

I have yelled at my kids – cussed even.  I have occasionally thrown better temper tantrums than they can.

I am super strict about things like meals, bedtimes, school, and chores because I want them to be responsible adults.

Sometimes I count down the days till my kids go to their Dads… even though my body physically aches when they are gone.

I never even attempted to breastfeed any of my children.

I have no idea if my car seat was always installed properly.

All of my kids have been in the ER… a few times.

I worked outside of the home for a time when my kids were younger.

I love it that there are a set amount of hours that they are in school every day.

I usually have dirty dishes in the sink.

Sometimes we stay in our pajamas all day long.

We talk a lot about things a lot of people would consider inappropriate.  Including sex.  Even the 11 year old.

I cook for them, but I don’t always cook every day.  I let them sometimes eat cereal for dinner if they want.

They sometimes wear socks that don’t match.  Ok…maybe they do this everyday.

At some point during each week, I like one of my kids more than the other.  It varies by the day.

My daughter still has a special blanket that she sleeps with…and so do I.

I don’t save every piece of artwork they created.

My children are allowed to have gay friends, black friends, bi racial friends, bisexual friends, gothic friends, or whatever other friends they manage to find.  We do not teach discrimination.

I buy them second hand clothes.

I let them listen to Lady Gaga, Katy Perry, and watch Jeff Dunham.

They all have cell phones.  The youngest one is 11.  She’s had hers for a few years.

I took my then 15 year old daughter (now almost 18) to a nickleback concert, along with her best friend.  Overnight.  Her best friend was a boy.  (Yes they were supervised the whole 24 hours that we were gone.)  I allowed them to have seats by themselves on the other side of the stadium.  Unfortunetely, I think the people beside them may have been smoking pot.  My daughter tells great stories about it. It was funny.

My son is circumcised.

I can never keep up with the laundry.

When I have a rough day, I often take it out on my husband.  He is a great sport.

I’ve been known to let them have brownies for breakfast.

Sometimes, Spencer only gets a bath because I can’t remember when the last time was he had one.

But, wanna know why I'm a good mom?

I am here.  I have not run away from them and left them alone and motherless.

I have not abused them.

I did not ever leave them unattended in the bathtub to drown.

I never "forgot" they were in a car and left them to bake.

They get regular medical care when they need it.

They are fed when they are hungry and given a drink every time they are thirsty.

They are disciplined when they need to be.

They know respect, and will say please and thank you.

I don't care if you think I'm a crappy mom.  My kids all love me, and their opinion is the only one that matters.