Spencer is everything a nine-year-old should be. He is happy, personable, and a big ball of joy. He loves to play, swim and watch action movies. But what he does not know is that he has a terminal, incurable disease. 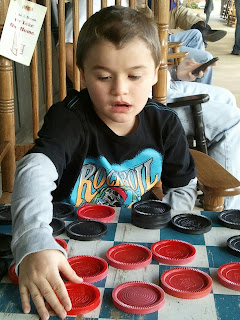 Failing a medical breakthrough, or some other type of miracle, Spencer’s life will follow a predetermined path, mapped out by this progressive muscle wasting condition. In short, he will no longer be able to walk by the time he reaches adolescence and will lose the use of every single muscle in his body thereafter. He may need spinal rods to keep him upright and ventilation to help him breath. Eventually his heart and lungs will fail and he will die.
Last week, we saw new doctors who gave us a lot more information on what to expect as Spencer’s disease progresses. We were told about surgeries that he will need, and given websites to go to view options for wheelchairs to fit a nine year old.  There are no words to describe the utter devastation felt upon hearing that your child's life will be cut short because there is no cure. We have had the greatest pleasure watching Spencer develop into the amazing boy he is today but now, unbelievably, we must prepare ourselves for his steady decline. And the worst part? Seeing him struggle as his body wastes away and being absolutely powerless to help.

Some things in life make no sense to me.  Not long ago, I spent all my time researching and finding ways to help my now 13 year old son survive cancer.  Only to know, that even though he survived that round, given his age at diagnosis, cancer is likely to be the disease that eventually ends his life.  It’s funny how, even knowing that in the back of your mind, you are still able to reach a state where it seems like a lifetime ago.  Now I realize that I’ve rejoiced in the feeling that I saved one little boys life, only to find out I will be watching another little boy, that I love, wither away and eventually die in front of me.

And why?  With all the advances that we have in this world.  All the technology.  All the knowledge.  All the research.  Why?  It’s bad enough to see adults die.  But WHY do children have to die?

This weekend, the other kids went back home for visitation.  While they were gone, we took Spencer and Madi to a birthday party at a pumpkin patch called Down Home on the Farm.  Madi had such a great time, made new friends, and explored the corn maze for hours.  Laughing, getting lost in the corn, and playing like only 12 year olds can.  Spencer also had fun.  Just starting to talk, and gaining the ability for those around him to comprehend what he is saying, we heard him say for the first time “That was fun!” when the cow train he had just ridden stopped after a whirlwind trip around the pasture.  Dad helped him shoot slingshots at targets on the hill, he watched pigs race, slid down an underground slide, and took a hayride.  But as we sat at a picnic table at the end of the day, Mike said to me; “I can only imagine how much he would enjoy this place if he was able to experience it through the body and mind of a normal nine year old.” 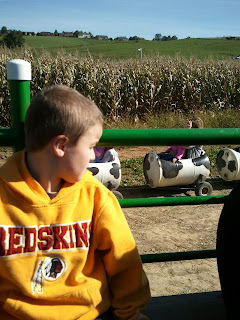 None of us would change Spencer.  We love him.  Well…maybe that’s not quite the truth.  If we could we WOULD change him.  We would take away the Muscular Dystrophy, and give him his life back.  We would tell him that one day he would grow up and get married.  Have babies.  Take them to the pumpkin patch.  We would hope that we would pass away before he does.  We wouldn’t have to worry who will take care of him for the rest of his life if something were to happen to us tomorrow.  We would give him the ability to walk forever.  We would tell him that he doesn’t have to sleep in uncomfortable plastic boots at night that hold his feet at awkward angles to keep his tendons stretched out.  I’d let him know that he’d be grounded if he ever tried to sneak out of the house as a teenager, or came home after curfew.  All things that, right now, will never be things we can promise him or give to him.

We have wonderful children.  We have a wonderful life.  We have a new house.  Great friends.  Heck, we live AT the beach.  We take vacations to Disneyworld.  We live the American dream.  Don’t get us wrong…we LOVE our lives.  We LOVE the children that we have, with whatever comes with having them to love.

They say that children with DMD accept it better than their parents, but to know that we are facing a future without him is impossible to believe. Some days I really just would like to know….why?  Why do things like cancer, bleeding disorders, and Muscular Dystrophy happen to children?  Why do those words even exist?  I know none of you can tell me.  I don’t think even if you thought you could tell me, that I would buy any reason you gave anyway.  I just really wish there WAS a reason why.  Then at least it would be fixable. 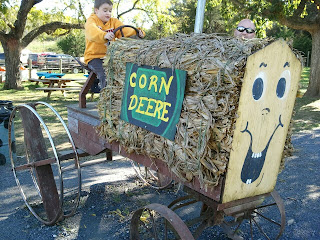