Every day is a happy one 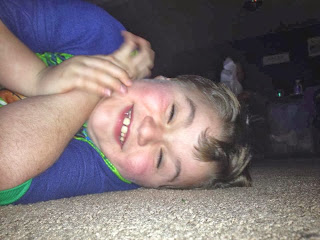 If I have one reason to still believe, this is it.


It's been a long time since I've blogged about anything.  Sometimes life gets in the way and things take a backseat.  Or, as in my case, sometimes things happen that you just want to keep private.

And then you realize that people care about you more than you might think.  People love you no matter what your circumstances are.  And most importantly, you realize that some things are just beyond your control and just because you think no one knows, doesn't mean they really don't.

Today, i got my reality check.  In the form of a little elderly elf who knocked on my door and announced that he was here to get our phone number so that he could deliver some holiday cheer.

Holiday cheer?  What's that?  We haven't seen much of it this year.  Spencer's health has been declining and it's likely he will only walk for another year or so, and then become totally wheelchair dependent.  From that point on, it's just a gradual decline leading to the end.  A doctor a few months ago at a clinic we went to put it into perspective when discussing various doctors that need to be seen and tests that need to be run, by saying "In the end, it's a matter of being on top of how you are going to die."  DMD has no cure.  He will die.  He's likely half way there.  And we are through the good half.  We are now talking home modifications, and wheelchair accessible vans.  All of which cost money. We are banking on clinical trials to buy us just a little more time, and experimental medications that might help for a while.  But we know that all roads from here on out have the same destination.  And time is no longer on our side.

At the same time, one of our other children has been hospitalized for the majority of this year.  I keep saying ten months, but I now realize we are nearly through 11 months at this point.  When Spencer and Madi were younger their mother died of breast cancer.  A year later at age 9, there was an accident where Madi was behind the wheel of a vehicle and accidentally backed over her Nana, who died the next day from injuries.  The result as you might expect has been hard on her.  Depression at any age is not an easy thing.  For going on 11 months now she has been getting the inpatient care she needs to make it through this.

On top of all of this, our 14 year old son who received cancer treatments at ages 2 and 3, is having complications related to treatment, which may also require surgery.  (now and in the future.)

Medically, we are drowning.  We have been paying our bills, and managing to buy food, all the while hiding from the world how much this all is affecting us. Hiding even the fact that some of it is going on from everyone we know.  Today that changes.  I realize that sometimes people know alot more than you think they do, and alot of times they put their own ideas into motion.  Rumors often exceed the truth. Alot of things will still be kept private to protect our children, but the reality is, we are dealing with these things.  Every day. Medical bills and expenses are killing us, on top of us needing to come up with money for huge home modifications (ramp and bathroom for Spencer's needs), and the cost of a handicap van coming up. Financially although we are paying our bills and managing to eat....Christmas has not been something I have been looking forward to at all. We have worked hard, especially this year, to teach our children that Christmas is not about what you have, it's about Jesus, love, and giving. At the same time, knowing you only have one gift to give each of your children is tough, especially when one still believes. (Spencer.)

Our kids were given the option of a second gift, OR they could use that money to buy $5 gifts for each other. They chose to buy for one another. They also chose that we would buy for a select few others, rather than ourselves, such as Spencer's aides and teachers at spencers school, etc... People who show us love every day and deserve it.)

Then today, as we were cleaning house, our doorbell rings. One of Santa's helpers showed up to let Spencer know that he has a delivery from Santa and needed our number to call us back later and set up a time. (On another note, Spencer is now on his best behavior, as he thinks Santa has sent someone to his house!) He was from Spencer's teacher's church. He was excited to meet and talk to Spencer and told him that Santa has lots of gifts for him, and for everyone in our family. I feel like a huge mound of guilt over not being able to provide something that I know shouldn't be expected in the first place , has been lifted off of my shoulders. I know this is not what the season is about. But I wanted to also be able to share the kindness that has been bestowed upon us by others this season. Last year, we were in better shape and we adopted an elderly lady and showered her with gifts all month long. This year, someone has gifted us with kindness beyond anything I feel like I can repay. (and I don't even know what it is yet....but just the idea that someone has done this for us is kindness enough.)

I will share more as I find out more, but I don't want the gesture to go unnoticed or unappreciated. God bless you every one. Spencer is in his happy place.