One of those "Once In A Lifetime" things...

Today started out like any other day in my 17 year old's life....with her scrounging around in the kitchen for food.  I was in the middle of cooking breakfast.  She wanted to eat a chocolate cupcake.  So, of course, she had her cupcake and her boyfriend (Sam) showed up and ate her biscuits and gravy.  Then she had leftover Texas Roadhouse chicken.  Then they went shopping....for graduation shoes.  Graduation shoes for her High School graduation that was happening in just a few hours.  She's always been a last minute kind of girl.  (It seems to work for her.)  Except for when it comes to graduation.  THAT she pulled out of the hat a year early.

In middle school, Morgan was a take it or leave it kind of student.  She loved sports, but she hated the work.  She did the work, but only so she could play the sports.  And she played sports like no other.  In elementary school, she decided she wanted to play baseball.  Nevermind that it was a boys sport.  She had never played before but was willing to learn.  Three years and lots of learning later, she was playing first base in an all boys league. In 6th grade she tried out for the volleyball team and walked away as the only sixth grade starter on the team.  She had never played volleyball.  That same year she made the middle school cheerleading team.  By 8th grade, she had to make a choice....keep playing both middle school volleyball and cheerleading OR give up volleyball and attempt to make the JV cheerleading team as an 8th grader....so she became an 8th grade JV cheerleader.  The next year, she was JV Captain.  By tenth grade she was on the Varsityteam and had been playing JV softball.  Sports were her element.

School happened more by chance.  One day in her 9th grade year, she came home and said "Mom...I've discovered the teachers like me better if I turn my work in on time and pay attention.  Then they cut me slack.  I think I should pay attention."  And then she did...and she was obsessive about it.  She was willing to do extra credit to turn a B into an A.  She knew where and when to show up to find a good tutor in math class.  She made a game out of learning what made her teachers tick and how to tailor her skills in their classes into exactly what they were looking for.  In 9th grade her science teacher wrote me a letter saying that when she was ready to apply for college he was willing to write her a recommendation.  That wasn't the first letter I got like that.  Beginning in 8th grade, she went to summer school every summer.  She was racking up credits like she loved school.

Then at the end of her 10th grade year, I got married, and we moved to the beach.  She wasn't gung-ho about the move but she made the best of it.  The first day we walked into her new school, the guidance counselor looked at her transcript and said "wow!".  Then he asked her if she wanted to play on their softball team...even though they only had five weeks left of school.

Between her 10th and 11th grade years, we bought a house.  We had moved four miles and into a new school district.  Morgan showed up the day of cheer tryouts.  She had no idea what the routine was, who the coach was, or what they expected.  And she was competing against a large number of girls for a small number of spots.  She aced it.  She became a Tallwood High School Sideline Cheerleader, and a Tallwood High School Competition Cheerleader all in a matter of days. 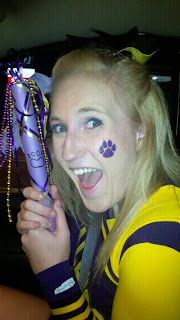 That is what is known as a spirit stick.  For one glorious week, it was hers.

Then less than a month into the school year, she comes to me and asks what I think of her dropping some electives and graduating High School a year early.  If she was willing to forgo the fun stuff (with the exception of Oceanography which she loved and couldn't bear to part with), she could double her course load, take English 12 in summer school, and graduate a year early.  Within 24 hours, she was well on her way to achieving that goal.

Today Morgan Graduated Tallwood High School one year ahead of schedule, and she graduated with Honors. I totally saw that one coming.  As she walked into the school for the graduation ceremony, she said to me "Mom...this is one of those things I only ever get to do once in my lifetime." 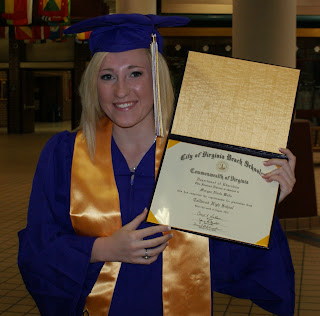 Congratulations Morgan....you have always been, and continue to be, simply amazing. 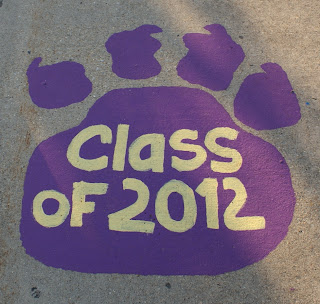