After a brief break, I'm back and ready to tackle the end of the trip.  I left off on day six.  A day the older kids had GREATLY been looking forward to, as we were heading to Hollywood Studios.  This is their favorite of the Disney parks and it is also the location of Star Tours.  My older kids are big Star Wars buffs.  Our plan was to get there early and sign up for the Jedi Training Academy. 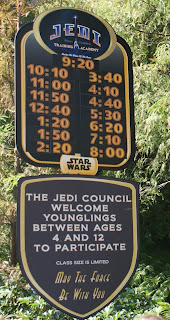 As you can see there are quite a few shows that happen throughout the day....HOWEVEVER...they fill up FAST.  We had planned to get there when the park opened at 9am, but we took longer getting ready than anticipated.  We got there around 10am and RAN to the Star Tours site.  There was a very nice young lady named MJ working there and she directed us to where we needed to go and told us to ask for Carol.  When we found Carol, they were already taking reservations for the 8pm Jedi academy!!!  No worries....Carol said that since we were Make A Wish that she would squeeze Aspen into the 11am academy, and Madi into the 11:50 academy.  (Padawan's can only be up to age 12, or I think Madison would have tried to do it too!)  The girls were super excited because, other than Star Wars weekends, the Jedi training academy is the ONLY place that Darth Vader appears.  He does NOT do meet and greets.  Spencer wanted to do the academy also, but he doesn't have the mobility to be on stage and move around and "fight" Darth Vader.  Carol asked us if we could be back with him at 2:30, that she could arrange for him to be "taken to the dark side".  (Who knew Spencer had a dark side...)  Then it was time for Aspen to partake in her Jedi training.... 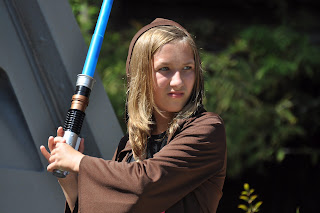 She was a fast learning Padawan, and it's a good thing because it wasn't long before the ship was invaded by the man himself.... 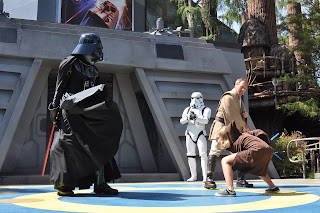 Then there was a brief interlude, while we waited for Madi's group to appear next.  The lady from before (MJ) came down to talk to us and told us some more about our meeting with the dark side.  She told us that private audiences with Darth are rare and at the most 2 or 3 families a day get the experience...some days he does NO meetings.  99% of the park employees have never seen it happen, including her and she works the Jedi Academy.  She said they usually allow only one cast member to go back with you and the photopass photographer.  (I am completely stumped as to why Darth Vader is so elusive, yet it seems they like the mystery of it all.)  So now we were really stoked.  The photographer for Darth Vader also came up to us and asked us if we wanted her to do a special "magic" photo of Spencer.  (Sure we did!)  She had him stand in front of the stage/ship and hold up a light saber....aimed at a tree.  The final result when we checked out our photos was.... 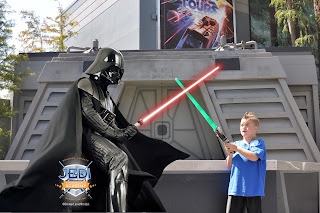 Then Madi's group of Padawan's was ready to take the stage.... 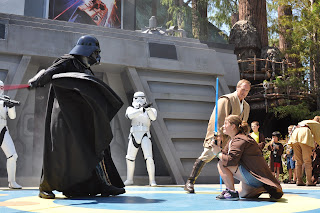 Madi hated all of her photos, but I thought it one was cool.

Then of course we rode Star Tours (there are 54 possible outcomes on that ride, for those of you who have never been), and then headed to see the Stunt car show....Lights, Camera, Action!  Despite all of the action of that show, Spencer's favorite part was the unexpected appearance of.....(drum roll....) 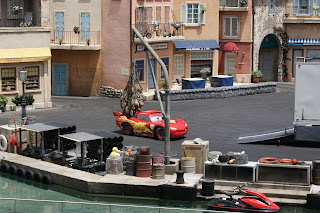 Yes! That IS McQueen!

As soon as we left there it was time to head back to meet up with Carol and go over to the dark side.  As we were waiting on her, MJ appeared to check on us and Carol asked her to take us up to wait on Darth.  You have NO idea how excited MJ was.  Once we were done with it all, she even came back to thank us for giving her the chance to finally get to participate in one of the meet and greets.  I think she was as happy as we were.  Anyway, we headed through the Star Tours ride up onto a platform above the riders waiting to ride.  (This it seems is The Dark Side.)  And soon HE appeared.  Not only did he appear but he had a surprise for Spencer....An autographed Light Saber (Red of course...that's Darth's color).  He presented Spencer with it and made his day.  Actually, the older kids were just as excited.  They have already informed us of how we NEED to display that on the bedroom wall so that Darth's signature is visible.  They took great care in protecting it for Spencer. 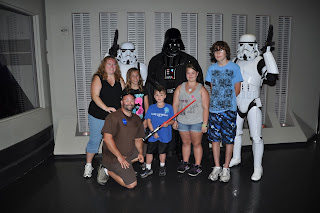 The whole thing may have lasted ten minutes, but it is ten minutes that will live on in my children's minds FOREVER.  And something that they got to do at Disneyworld that their friends will likely never get to do.  They are still talking about it.


After that, the only two things we cared about doing were The Great American Movie Ride and Tower of Terror.  My husband has never ridden the Movie ride and I loved it the last time we went, so I wanted to take him on it. 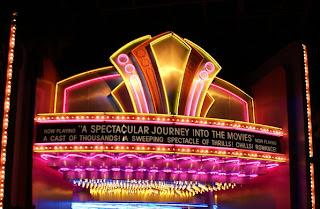 It is a ride that is ridden "train style" through movie sets from the greatest movies of all time.  Through the ages.  It's also interactive.  You have a guide who participates in the action and narrates the whole ride.  Mike loved it, just like I knew he would.  One of our favorite sets is The Wizard of Oz.  It's also air conditioned and it was almost 100 degrees so that was an added benefit! 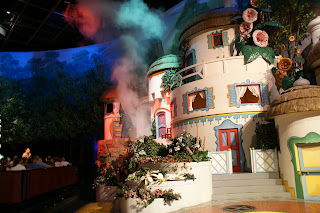 After that, we grabbed some lunch and headed to Tower of Terror.  For some reason, the last time we were there Spencer didn't ride this.  So he had never been on it.  Everyone knows he is an adrenaline junkie and we had already decided to let him do it this time.  Madison said he was NOT riding that, so he walked through with us and then waited in the  gift shop on us.  (I'm actually quite proud of him.  He usually doesn't want to ride anything, but on this trip he rode 95% of everything...willingly!)  Spencer LOVED Tower of Terror.  Even though he doesn't speak too well most of the time (but it's getting better!), when he is excited he stutters.  As soon as the ride stopped he said "I....I....I wanna....I wanna....I wanna do it again!"  And, as usual, they gave us the photo.... 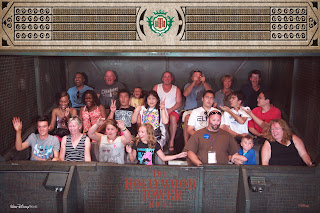 By this time, we were hot and tired.  So we decided to head back to the village to grab some ice cream and cookies and swim in the pool.  It was our last night, and Spencer loves the pool and the cookies.  We parked at the front of the village and took a route we never take across to the ice cream palace.  On the way we saw this mailbox, announcing that it delivers "Letters to God"...what a wonderful idea!!!! 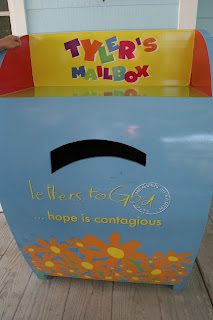 Then it was on to grab ice cream and cookies! 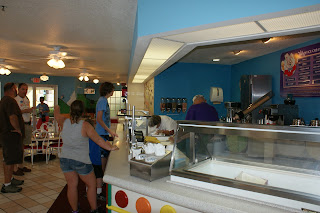 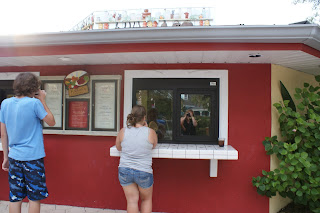 Then they would hop next door and order cookies at Katie's Kitchen! LOL

Everyone headed back to our villa to get outfitted for the pool.  I threw some clothes in the washer and folded some towels, so I got there later than the others did.  As I came through the entrance, I ran into this lady and her parrot! 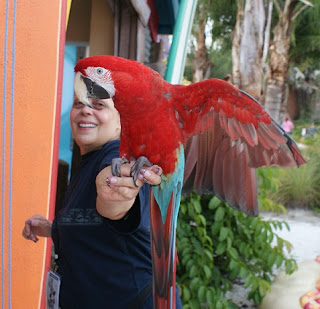 There were actually two of them, but this one posed for me!  I ran in to tell everyone else...and found then scattered all about the pool and the water garden. 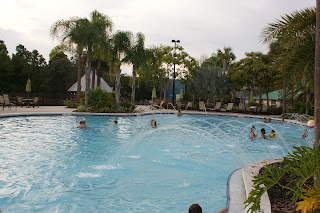 It was still pretty light and we got alot of time in at the pool. 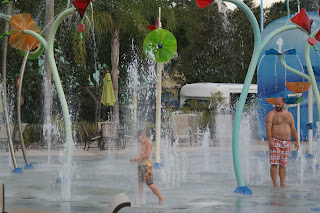 This is the water garden....Spencer and Mike spent alot of time in there.  They swore the water was cooler than the pool.

By the time we finished up at the pool, it was getting dark and the Mayor and Miss Merry were out doing tuck ins....in their mini convertibles!!!  They even stopped so I could take some pictures! 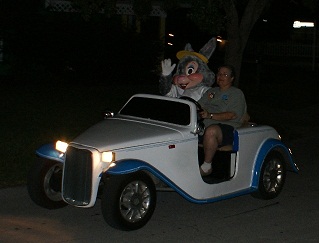 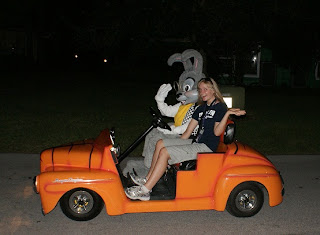 Since Mayor Clayton's tuck in was one of Spencer's favorite things about the village it was a really cool way to end our last night at the village.  All of us were exhausted but none of us were looking forward to leaving this wonderful place!