Day 5 had us off to Aquatica, which is Seaworld's Waterpark.  (If I haven't mentioned it yet, all of the tickets to the parks were donated to us through Give Kids the World...the resort where we stayed.)  Aquatica is like most waterparks except they have dolphins and fish that you swim side by side with!  Of course I couldn't take my digital camera in with me because of the water, but I did take the waterproof disposables and as soon as I get them developed, I will update this with some photos.  It was amazing!  We spent a few hours there and then right when we were deciding to leave and go get lunch, a storm blew through and solved that dilemma for us.  We headed back to GKTW to grab lunch (all the food there is free), and get ready for The Pirate Dinner Theatre!  ARRRRGGGGG!!!!

On the way to the dinner theatre, we saw evidence that the zombie's are definitely emerging in Florida!  And they are getting ready.... 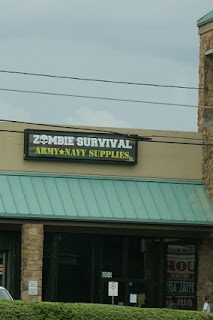 The kids spotted this while we were sitting at a red light....

We had decided before we went that we wanted to do this dinner theatre.  It's voted the best dinner theatre in all of Orlando.  I won't spoil it for anyone who ever goes but there is amazing food, a big ship, pirates galore, and a kidnapped princess.  Oh there is also a rescue and a wedding. Spencer was a guest of the theatre, and they gave the rest of us 50% on our tickets, which was a HUGE savings!  The pirates sang and danced and everyone knows that Spencer is big on that! 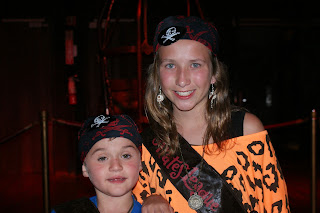 Spencer and Aspen wore their costumes from the Pirates League a few days earlier!

Before we went into the actual show there was some entertainment in the lobby..... 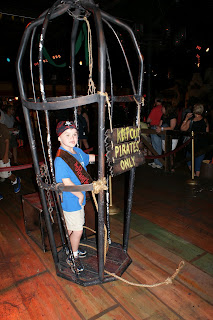 He can't read.  He didn't know it was pirates only!  Oh wait, he had on his pirate costume so it was ok!

Mike and I got drinks at the pirate bar, and mine came in this coconut! 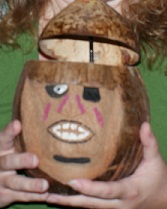 The pirates are great fans of a good drink!  They encourage it!

There was also a pre-show....(this was when the princess got kidnapped by the pirates and taken to their ship!) 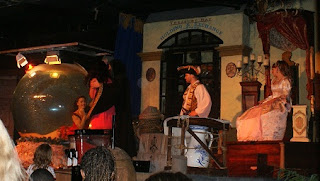 Each section had it's own personal pirate.  We were in the green section and our pirate was Jose!  He loved Spencer and did alot of interacting with him.  He even brought him pirate bling from the treasure chest at one point in the show! 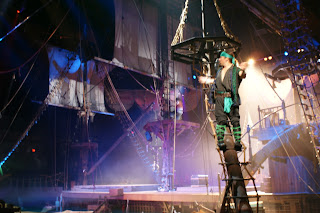 Later, Jose took Spencer up on the stage and the captain of the ship made him an official pirate!

Afterwards, there was a pirate party with alot of dancing and loud boisterous music.  We couldn't leave....everyone knows Spencer loves a good party! 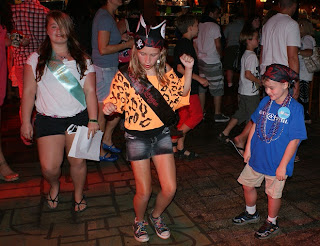 There was also more of Jose...he came out to join Spencer for a while! 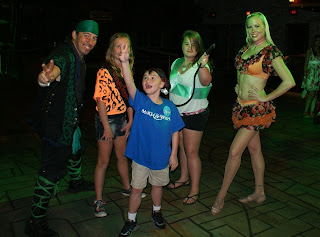 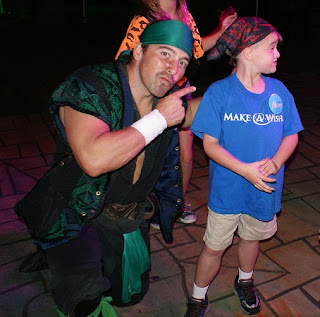 It was an amazing night full of lots of fun and laughter.  They also took a family photo of us, but I haven't unpacked everything yet!  Once I get it unpacked I will post it!
Posted by Unknown at 12:43 PM